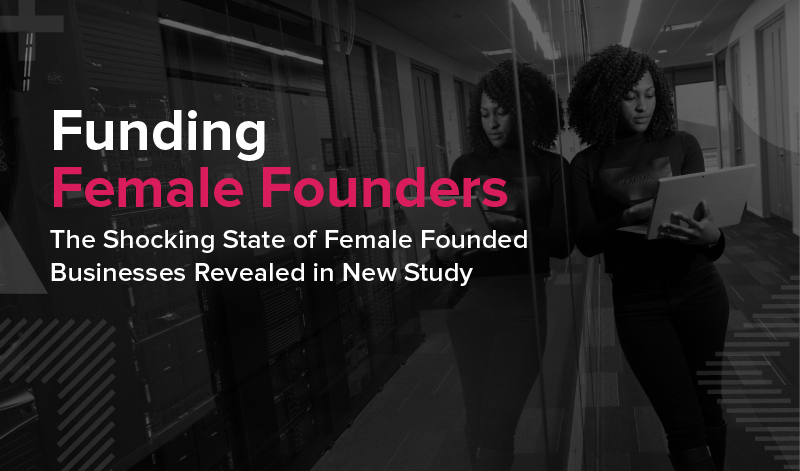 By analysing companies from the UK, the US and globally we have revealed the industries and countries where women are flourishing and which countries are falling short.

Women have come a long way in the last 100 years. In 1918, they were finally able to vote, in 1919, The Sex Disqualification (Removal) Act became law and in 1970, the UK Government passed the Equal Pay Act and in 1997, Marjorie Scardino became the first CEO of a FTSE 100 company, but we’re still not seeing enough women rising through the ranks in unicorn companies around the world.

According to Business Insider, every day 849 businesses are founded by women in the US alone, in 2019 21 female-founded unicorn companies were created, a number higher than ever before.

Women have been making their mark in the workplace with more women than ever before rising high up in the ranks and revealing their potential. Whilst progress has been made, female founders are still outnumbered by males.

Revealed: 2% of the World’s Top Companies have Female Founders 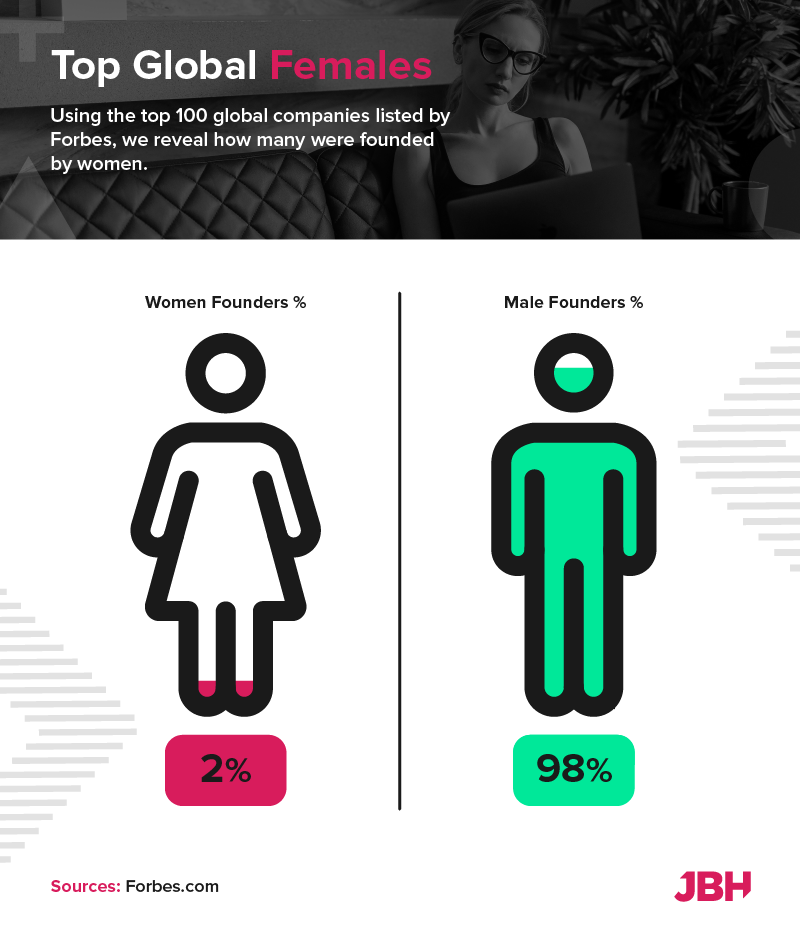 Only two of the top 100 companies were founded by women, both companies are also in the tech industry, one of the most competitive fields.

Both female-founded companies were created in the late 20th century compared to the other 98 companies which began as early as 1792, the list has an average founding year of 1940. Sadly it is not surprising or shocking that these companies have male founders as they were formed during a time of limited rights for women, a time when women held much less value in business or even day-to-day life.

2% is a figure that women know all too well, according to MarketWatch 2.2% of all investments in the US go to companies founded solely by women. Only 2% of female-owned businesses reach $1M in revenue, this is much lower than men. 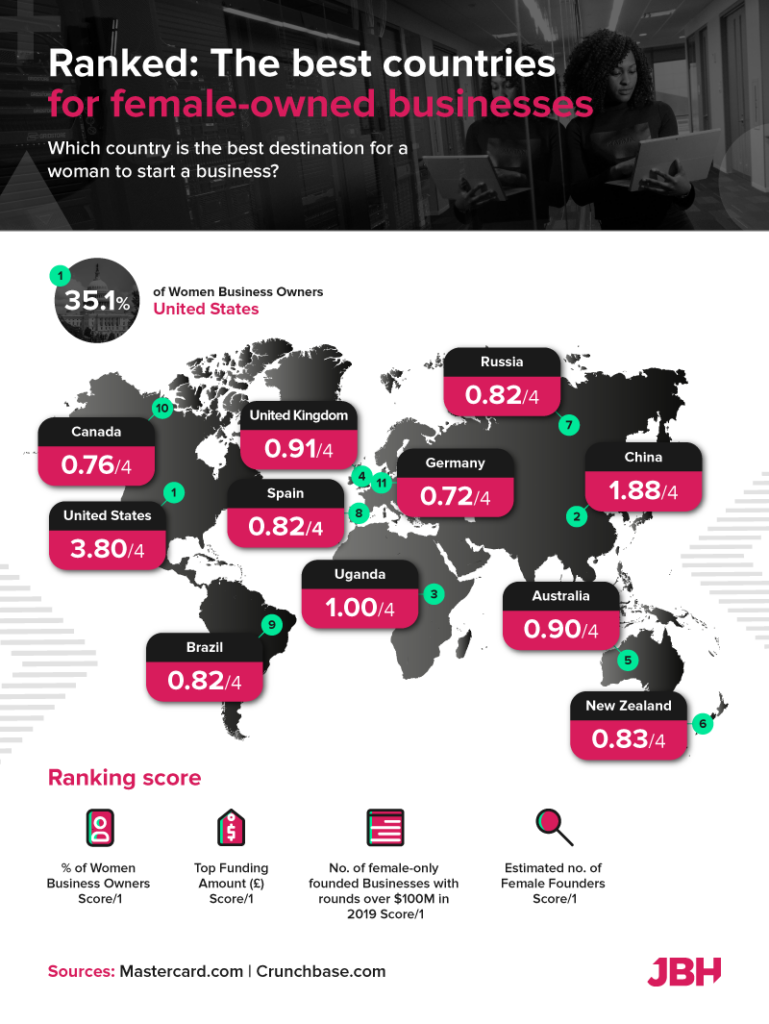 This data aligns perfectly with previous research, the Mastercard Index of Women Entrepreneurs 2019 offers great insight as to why some of these countries fall so low on the leaderboard. The index shows that cultural perceptions of entrepreneurship align with our data where the US comes out on top with Uganda close behind.

Taking the top-funded companies in each country we have found the industries who back their businesses the most, revealing the financial industry is the top player for funding with over £16bn from just one company. 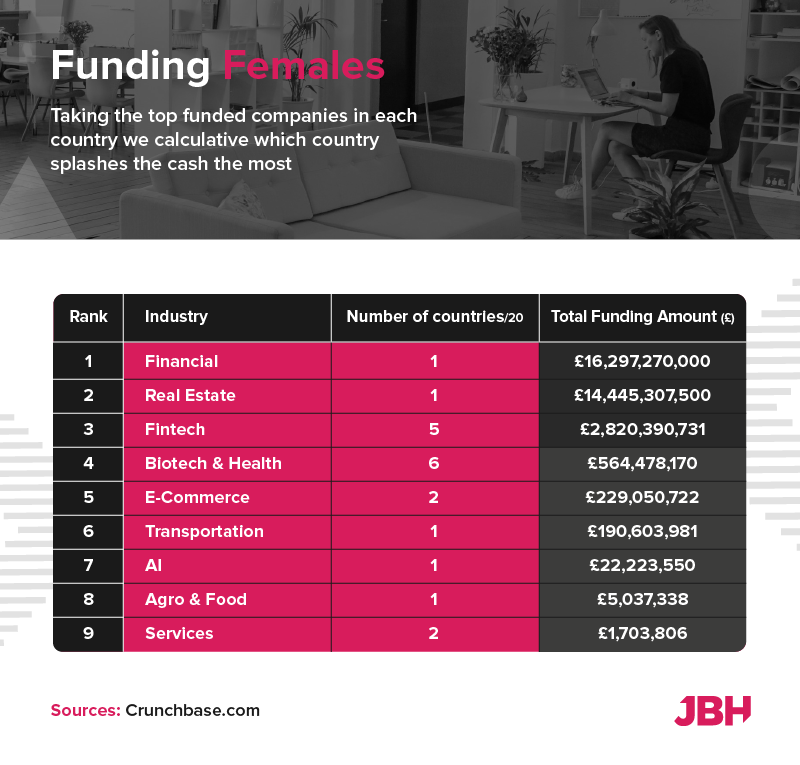 According to The World Bank, the US had a GDP of almost £16 trillion, this means that the top-funded female-owned company in the US is worth just 0.09% of the country’s GDP. The amount of funding received by the US top funded company is representative of every person in the US giving the company over £40 each.

The State of US Female Founders

Using data from Crunchbase we have ranked the top female founder-friendly states in the US. California has been crowned the best state in the US for a female to start a business. 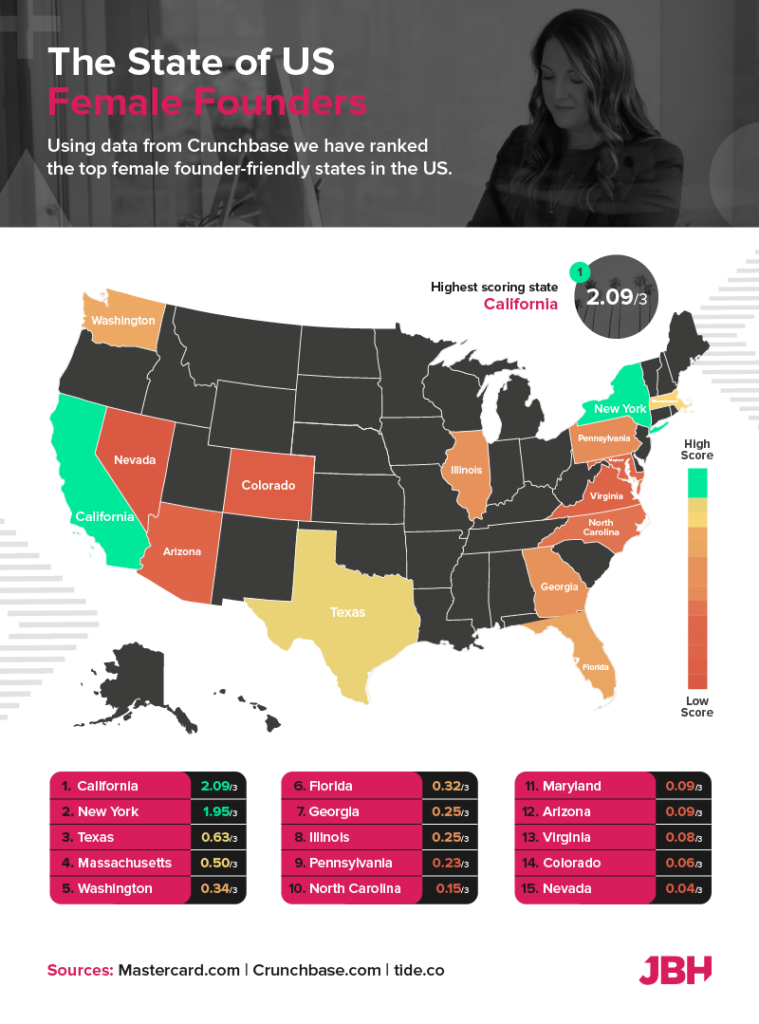 Most people may predict New York as the top state for business, California actually comes out on top for female founders. Not only does California have the powerhouse that is Los Angeles, within the San Francisco Bay area sits the famous Silicon Valley. Described as the mecca of tech and innovation and holds incredible tech opportunities.

The UK is the home to so many well-established companies and bright-eyed up and comers, many female-founded businesses started in the UK such as Starling Bank. The UK sits at number four on the global list but which area of the UK backs their female founders the most? 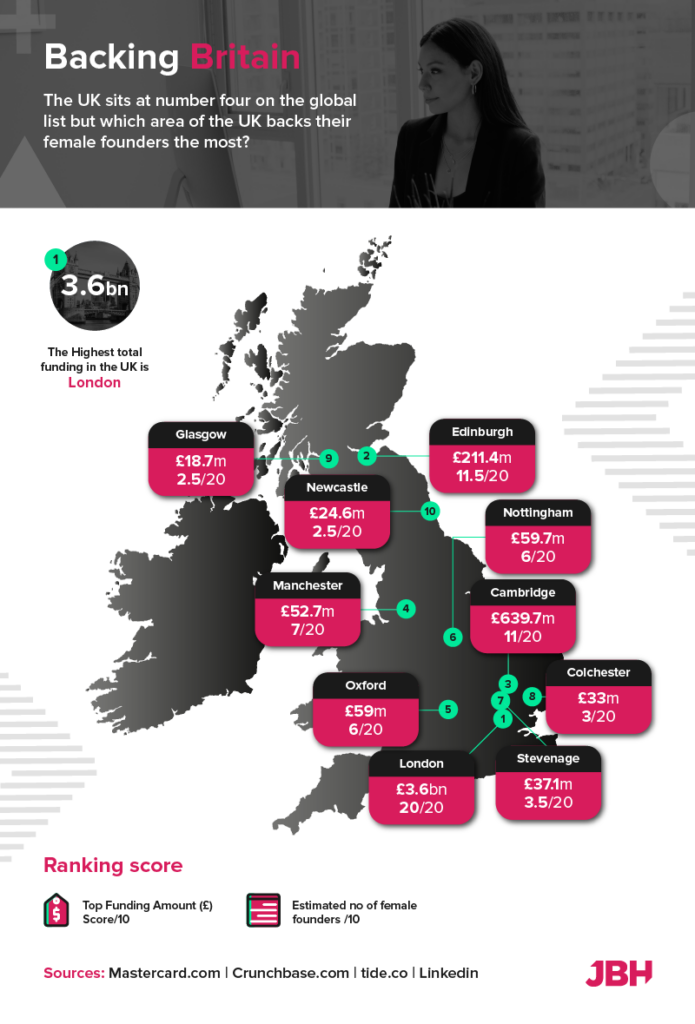 The UK holds so many funding opportunities, London wins by a landslide with £3.9bn of funding, the capital of England is also the business hub. Amongst the other contenders, there are some expected cities such as Manchester, however, lesser-known towns such as Colchester and Stevenage that both have more funding than Newcastle.

How We Can Help Female Founders

Research by The Boston Consulting Group and MassChallenge reports that although females are incredibly underfunded, female-founded startups generate more than twice the amount of revenue per $1 of funding.

While women are becoming more and more successful in the business world there are important steps we need to take in order to ensure women break through the gender divide.

“Being a female founder brings setbacks and challenges that male founders don’t have to experience. I’ve had to work harder than male colleagues to earn respect as a company founder and boss, but also as an expert throughout my career in marketing and PR. It’s fantastic to see other female founders succeeding and that there’s more support for women to start businesses today, especially in traditionally male-dominated industries. With data showing that female-led businesses are more successful, I’d love to see more opportunities for women in the c-suite in the future”.

There are a number of ways that female founders can be supported, it is incredibly easy to support these businesses from just a click.

Here are some great ways you can help:

How you can help women across the world

Many charities and organisations exist with the sole purpose of supporting women and helping them reach their potential. Where you want to volunteer, educate yourself or donate, find the links below:

What Support Can Women Business Owners Get?

Using a mix of sources including CrunchBase, Tide, MasterCard and Linkedin we have calculated the best places for female founders globally, in the US and the UK. Each component was ranked based on normalization ranking with a maximum score of one or 10 to find the best destinations. These ranked components include:

The anatomy of a back link