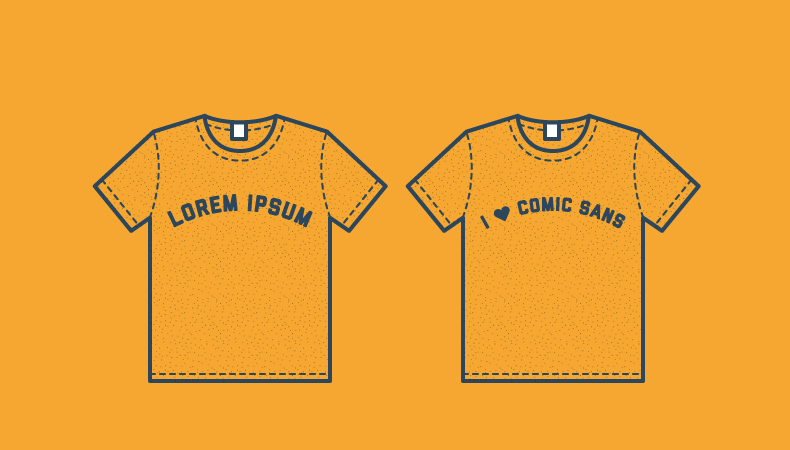 Work as a designer for long enough and you’ll probably start to pick up a few curious habits. During March we shared our “Silly Things Designers Do” series on Dribbble – a series of graphics intended as a teasing (yet loving) tribute to all of the quirks that become second-nature to us the longer we work in the industry. While we’re not all guilty of all of these, most of us indulge in at least a few. We’re not weird – we’re just great at what we do.

What would a designer be without a clever in-joke emblazoned across his or her chest? A traitor to our noble profession, that’s what.

For those not in the know, a “widow” is a lone word left hanging on its own line at the end of a paragraph. Widows are the bane of any designer’s life and we’ll look upon any piece of design that features them with haughty derision.

Kerning – adjusting the spacing between characters in a piece of text – is one of the really fiddly jobs designers do which often goes unnoticed. We definitely notice though and often find ourselves (either mentally or physically) kerning everything from shop signs to Alphabetti spaghetti.

Spending our lives on Photoshop (and its sister programs Illustrator and InDesign) means that we get used to having things our own way via “cmd+z” (undo), “cmd+c” (copy) and “cmd+x” (cut). Ever find yourself wishing you could “cmd+z” something in the real world? We do.

From Darth Vader and Wall-E to cute Japanese characters, designers often find themselves hoarding all manner of kitsch and collectable figurines. Why? Because they’re cool, that’s why!

Here’s where our kerning, mental Photoshopping and widow-watching come together as a tag team of disapproval. Menus are rarely something designers enjoy looking at – but we take great pleasure in deconstructing their (quite often terrible) designs and imagining how we definitely could’ve done a better job.

I once found myself in a trendy independent cinema sipping on a bottle of cola mixed with lemonade and orange. It was disgusting but I carried on drinking it because I loved the packaging and I wanted to take the bottle home to keep. That’s the logic of a designer – your product may suck, but if it looks pretty, we’re in.

Ah, remember that glorious fineliner. The one with the 0.8 tip, cosy grip and smooth action? Remember how devastated you were when it ran out of ink and you had to degrade yourself by using a lowly biro? Painful memories.

Doodling – it’s force of habit for designers. Sometimes when we’re deep in thought coming up with our next great idea, or on the phone waiting for a client to pick up, our hands go into autopilot and begin creating miniature artworks featuring cubes, 3d letterforms, mystery faces and random patterns. It’s unfortunate that sometimes we realise a little too late that our masterpieces have made their home on an important, irreplaceable document.

Dribbble; where designers go to seek inspiration, show off, and (occasionally) get jealous of great ideas that we didn’t think of first. It’s addictive, but we love it!

Designers. We might share some “silly” habits, but in the end we make the world a more beautiful place. Get in touch with us to chat about creating the kind of slick digital content your audiences will love to look at.

Next Post
This website uses cookies to improve your experience. We'll assume you're ok with this, but you can opt-out if you wish.Accept Read More
Necessary Always Enabled